I will try to keep the updates as much as I can so people can know that this game is not dead yet!

I also would like to take the time to talk about Rex. Not the main character in the demo, but the Real dog that he was based on. Rex was a real Good boy---er... German shepherd. I took some liberties with his appearances mostly because apparently when I made his sketches, the dark fur around his eyes made him look either sleep deprived, an gothic teen dog or zombie dog. All which, while hilarious! Was not very good in conveying the puuure happiness that is Rex. 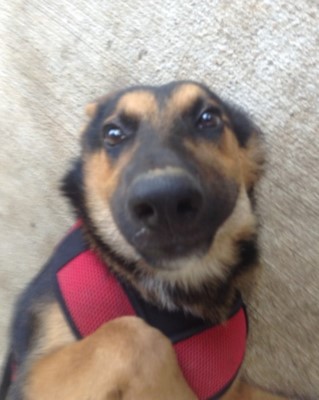 Rex, when I visited this good boy!

This is his story as told to me from a friend, :D Details might be a little wrong but this is how I remembered it. .

He was a hyper highly driven dog who was very obedient, always wants to play. He failed to be in the police academy because he could not coped being in a kennel for long periods of time and was super super nice so he was returned to the family that he was living with. But Alas,  a couple of months later, his family was moving into a smaller place with no backyard so they were looking around for people to adopt this goofy, hyper and very sweet boy.

It was very difficult to get people to adopt him as he was just a ball of pure energy for most people despite being well trained and very sweet. It was honestly very heart-breaking to see that Rex was not geting adopted or was too much for people. I could not take him myself as I lived with other people who do not want a big dog.  It was during this time that I got the idea to make a game about him and any other Pets that needs adopting! Cue K9-11 a police game about dogs and cats that need adopting based on actual dogs. one or two of the more uncommon pets are made up but yes, most of the dogs are REAL dogs!...(though all of them got adopted already but but but! My point still stands!) I hope this game will inspire you to get a pet as they tackle common dog problems such as why won't my human lie down when I'm around so I can lick him? And so forth!

(I  did more on the story, I added some more scenes and rewrote some dogs in the game)

Keep working on this game. Even if at sometimes it seems like no one will play your game, just know. I will make sure they do.

Why didn't I ever see this? Even if you're the only one that plays my game, that's good enough for me! :D Thank you so much for your message, I was actually having a bad day and didn't want to work on this game, (I'm making progress but it's so slow because time but your comment made me feel a lot better!

(Edit, I wrote We, but I meant I) This game is a solo project so I am doing the programming and the art. Which probably why it's takes me longer to finish. haha